The Bank of New Magincia where the City Stone and City Treasury are located. This is where all titles will be issued and Donations to the City Treasury are most welcome. Here also can be seen the Current Trade Deal. If you are at least a Respected Citizen you can come here every twenty four hours to benefit from the Trade Deal for free! Compliments of the Governors Office!

The Minister of Trade and his bottomless crate accepts your donations to increase your city loyalty. See the Minister to find out what you can bring. The Guard Captain still patrols the Docks from the Riots but these days he still hands out ropes and sells our City Banner to those of sufficient loyalty. 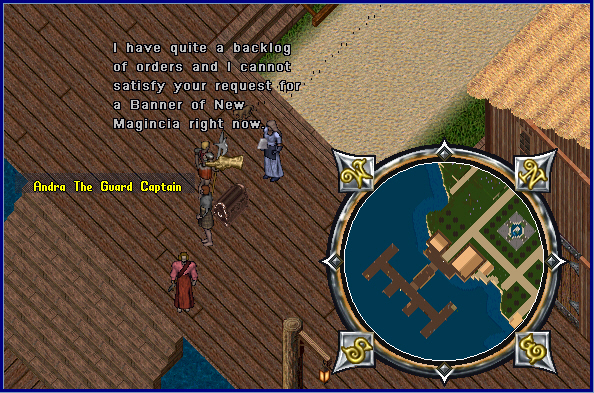 The City's Cleanup Officers can be found here. Reap the rewards of throwing out all your trash. Town Hall Meeting Place. Hopefully in the future we can petition the King for something more comfortable. My Office on New Magincia Beach, Governor or not. There is an official Governor's Office near the bank that I will post soon.